So why is the cost of higher education going up at a faster rate than most everything else? Economists please correct me if I’m wrong, but it must be that demand grew right? Universities are non-profits so they didn’t necessarily have to respond by increasing offers. But apparently they did. So if the proportion of the population going to college grew, why is there a shortage of STEM majors? I think it’s because the proportion of the population that can complete such a degree has not changed since 1985 and most of those people were already going to college. If this is right, then it implies that to make more offers, the universities had to grow majors with higher graduation rates. The graph below (taken from here) seems to confirm this: 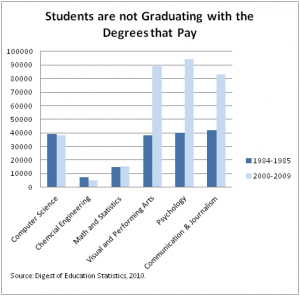 Unfortunately, in 1985 there was no dearth of psychologists, visual and performing artists, and journalists. So we should not be surprised that the increase in their numbers resulted in graduates from these fields having a harder time finding employment (see bottom of this table). Meanwhile, the US has 2 million job openingsthat can’t be filled, many in vocational careers. So why aren’t more students opting for technical training with good job prospects?In thisNYTimes article, Motoko Rich explains that

In European countries like Germany, Denmark and Switzerland, vocational programs have long been viable choices for a significant portion of teenagers. Yet in the United States, technical courses have often been viewed as the ugly stepchildren of education, backwaters for underachieving or difficult students.

It’s hard not to think that universities have benefited from the social stigma associated with vocational degrees. In any case, as I said in mymy previous post, I am not interested in telling people what to study, but universities should show students the data.