First let’s get the obvious facts out of the way: the federal budget is a mess, and Congress is completely disfunctional.  When it comes to NIH funding, this is not a good thing.

Hidden within the larger picture, though, is a serious menace to our decades-long record of incredibly successful research in the United States.  The investigator-driven, basic research grant is in even worse shape than the overall NIH budget.  A recent analysis by FASEB, shown in the figure here, reveals that the number of new R01s reached its peak in 2003 - ten years ago! - and has been steadily declining since.  In 2003, 7,430 new R01s were awarded.  In 2012, that number had dropped to 5,437, a 27% decline. 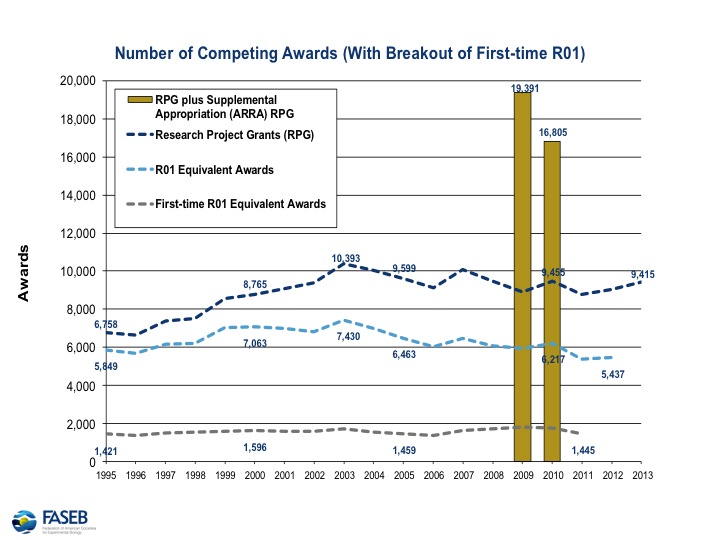 For those who might not be familiar with the NIH system, the R01 grant is the crown jewel of research grants.  R01s are awarded to individual scientists to pursue all varieties of biomedical research, from very basic science to clinical research.  For R01s, NIH doesn’t tell the scientists what to do: we propose the ideas, we write them up, and then NIH organizes a rigorous peer review (which isn’t perfect, but it’s the best system anyone has).  Only the top-scoring proposals get funded.

This process has gotten much tougher over the years.  In 1995, the success rate for R01s was 25.9%.  Today it is 18.4% and falling.  This includes applications from everyone, even the most experienced and proven scientists.  Thus no matter who you are, you can expect that there is more than an 80% chance that your grant application will be turned down.  In some areas it is even worse: NIAID’s website announced that it is currently funding only 6% of R01s.

Why are R01s declining?  Not for lack of interest: the number of applications last year was 29,627, an all-time high.  Besides the overall budget problem, another problem is growing: the fondness of the NIH administration for big, top-down science projects, many times with the letters “ome” or “omics” attached.

Yes, the human genome was a huge success.  Maybe the human microbiome will be too.  But now NIH is pushing gigantic, top-down projects: ENCODE, 1000 Genomes, the cancer anatomy genome project (CGAP), the cancer genome atlas (TCGA), a new “brain-ome” project, and more. The more money is allocated to these big projects, the less R01s NIH can fund. For example, NIAID, with its 6% R01 success rate, has been spending tens of millions of dollars per year on 3 large Microbial Genome Sequencing Center contracts and tens of millions more on 5 large Bioinformatics Resource Center contracts.  As far as I can tell, no one uses these bioinformatics resource centers for anything - in fact, virtually no one outside the centers even knows they exist. Furthermore, these large, top-down driven sequencing projects don’t address specific scientific hypotheses, but they produce something that the NIH administration seems to love: numbers.  It’s impressive to see how many genomes they’ve sequenced, and it makes for nice press releases.  But very often we simply don’t need these huge, top-down projects to answer scientific questions.  Genome sequencing is cheap enough that we can include it in an R01 grant, if only NIH will stop pouring all its sequencing money into these huge, monolithic projects.

I’ll be the first person to cheer if Congress gets its act together and fund NIH at a level that allows reasonable growth.  But whether or not that happens, the growth of big science projects, often created and run by administrators at NIH rather than scientists who have successfully competed for R01s, represents a major threat to the scientist-driven research that has served the world so well for the past 50 years.  Many scientists are afraid to speak out against this trend, because by doing so we (yes, this includes me) are criticizing those same NIH administrators who manage our R01s.   But someone has to say something.  A 27% decline in the number of R01s over the past decade is not a good thing.  Maybe it’s time to stop the omics train.