Jenny Bryan, developer of the google sheets R package, gave a talk at Use2015 about the package.

One of the things that got me most excited about the package was an example she gave in her talk of using the Google Sheets package for data collection at ultimate frisbee tournaments. One reason is that I used to play a little ultimate back in the day.

What you will need

What we are going to do is collect data in a Google Sheet or sheets. This sheet can be edited by anyone with the link using their computer or a mobile phone. Then we will use the googlesheets package to pull the data into R and analyze it.

After you have a first thing to do is to go to the Google Sheets I suggest bookmarking this page: https://docs.google.com/spreadsheets/u/0/ which skips the annoying splash screen.

Create a blank sheet and give it an appropriate title for whatever data you will be collecting. 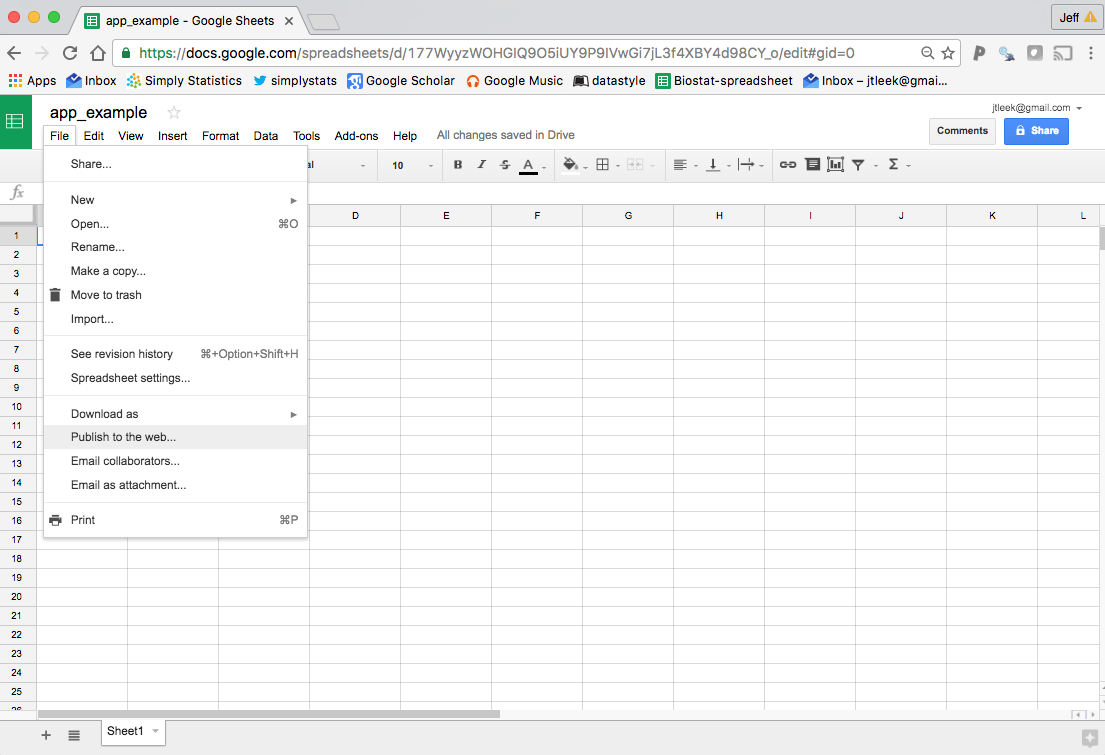 then it will ask you if you want to publish the sheet, just hit publish 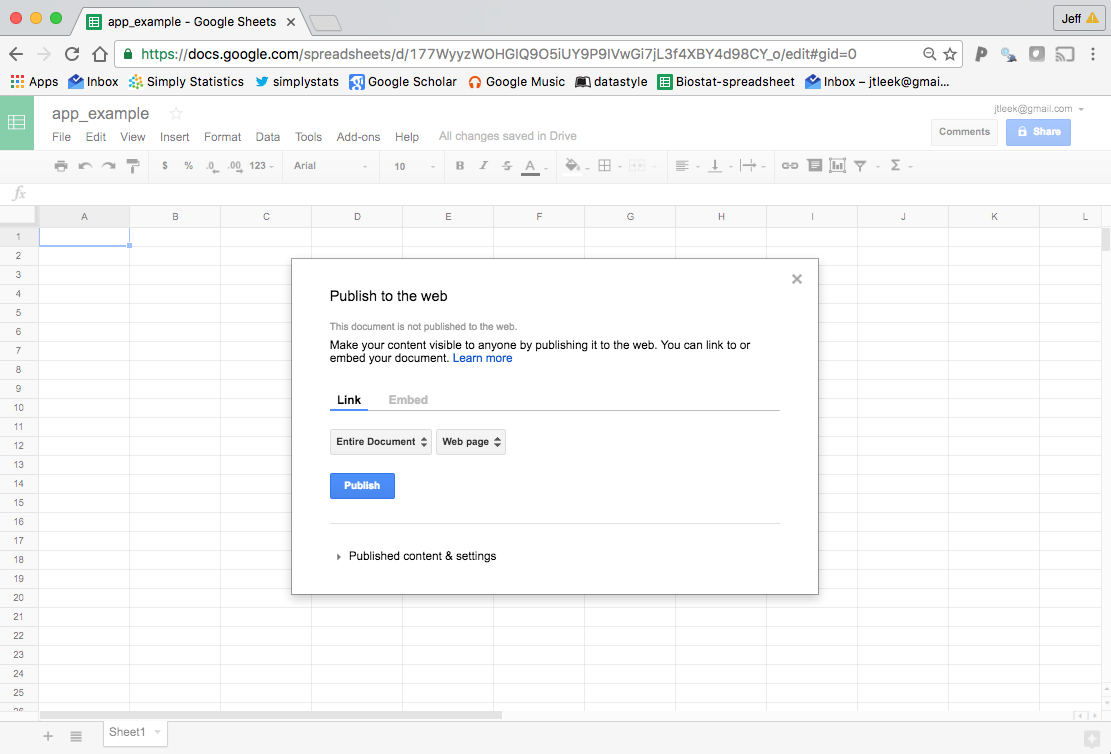 Copy the link it gives you and you can use it to read in the Google Sheet. If you want to see all the Google Sheets you can read in, you can load the package and use the gs_ls function.

It will pop up a dialog asking for you to authorize the googlesheets package to read from your Google Sheets account. Then you should see a list of spreadsheets you have created.

In my example I created a sheet called “app_example” so I can load the Google Sheet like this:

In this case the data I’m collecting is about who is at work right now as I’m writing this post :). But you could collect whatever you want.

Now that you have the data published to the web, you can read it into Google Sheets. Also, anyone with the link will be able to view the Google Sheet. But if you don’t change the sharing settings, you are the only one who can edit the sheet.

This is where you can make your data collection distributed if you want. If you go to the “Share” button, then click on advanced you will get a screen like this and have some options. 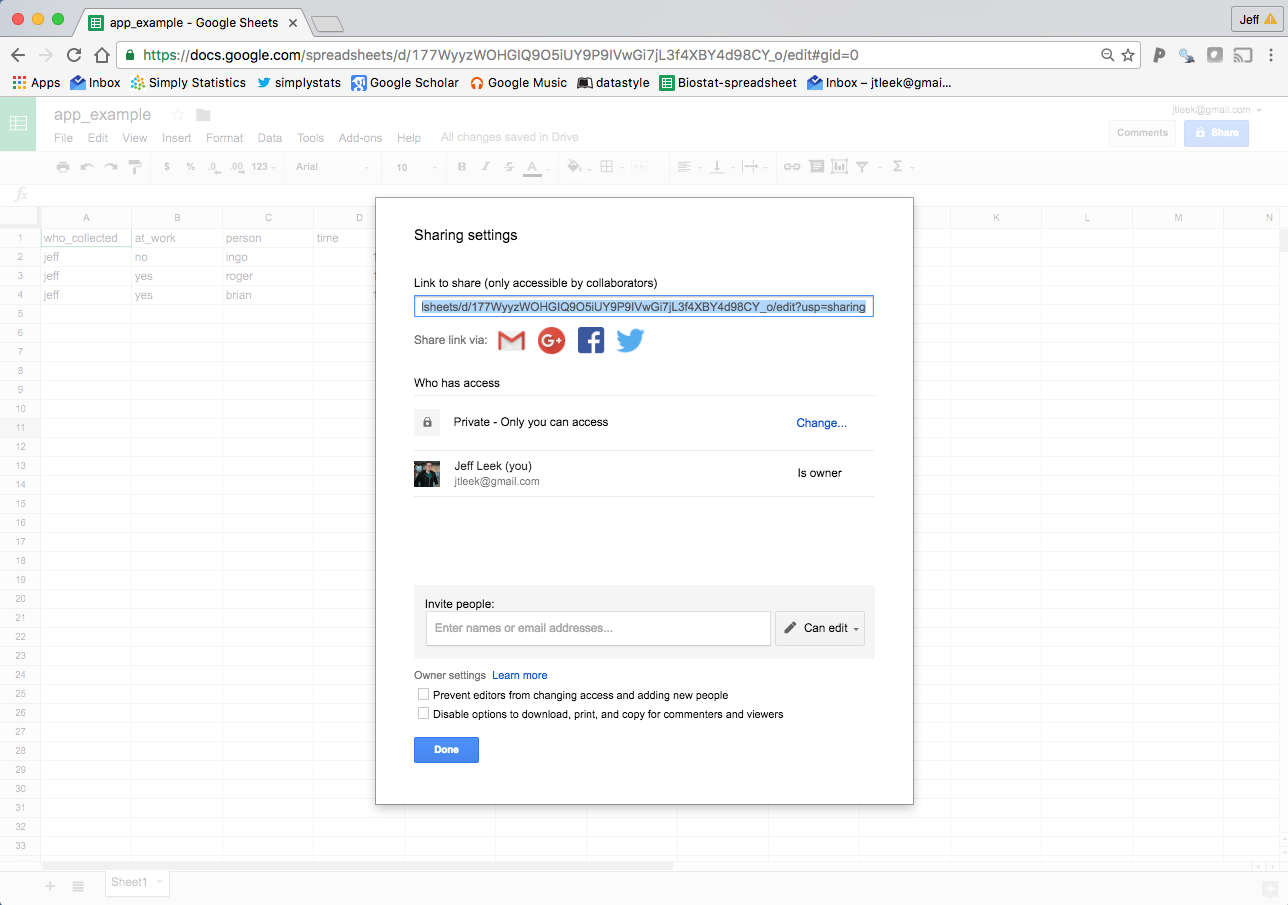 In the example I’m using I haven’t changed the sharing settings, so while you can see the sheet, you can’t edit it. This is nice if you want to collect some data and allow other people to read it, but you don’t want them to edit it.

If you just enter people’s emails then you can open the data collection to just those individuals you have shared the sheet with. Be careful though, if they don’t have Google email addresses, then they get a link which they could share with other people and this could lead to open data collection. 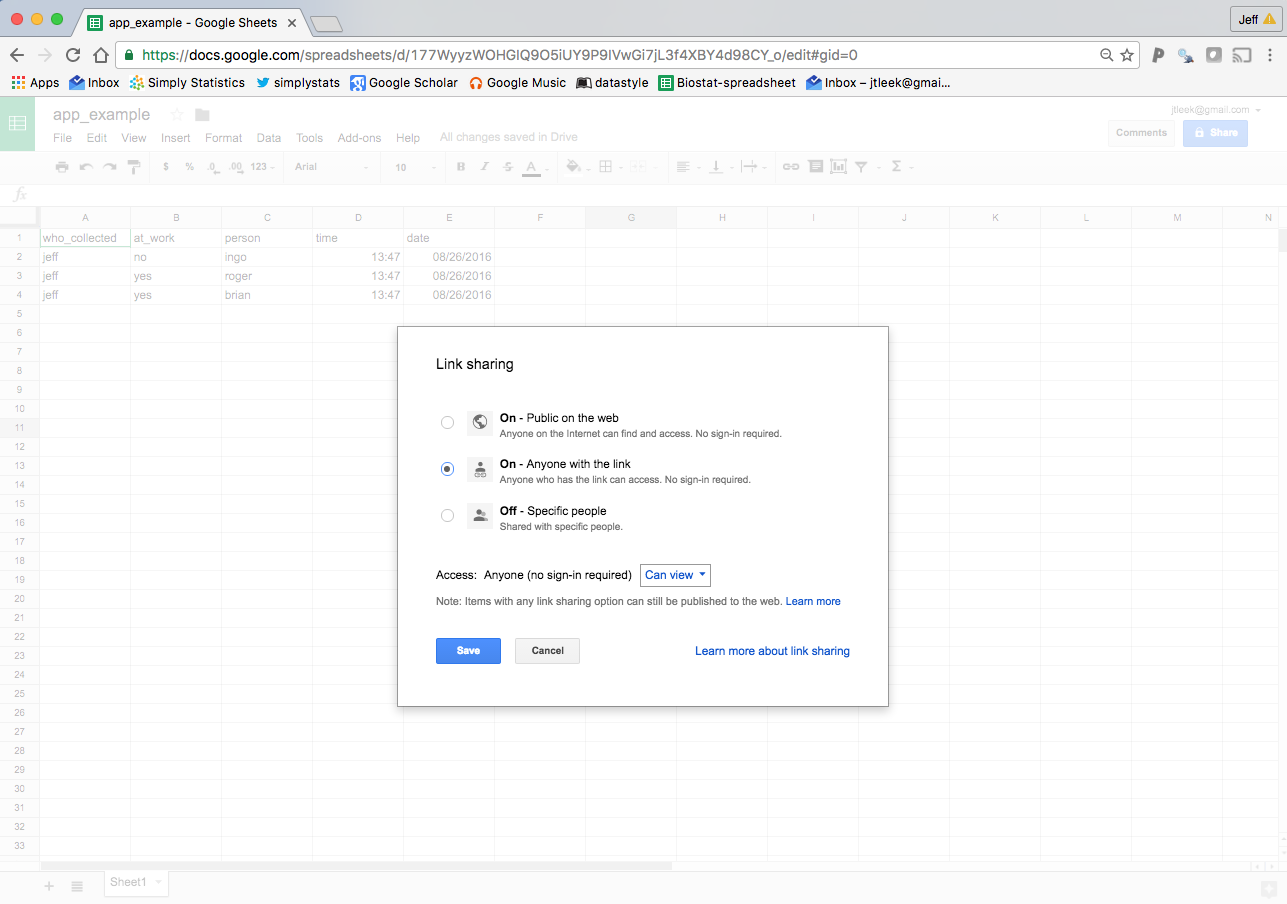 Then you can modify it to say “Can Edit” and hit “Save”. Now anyone who has the link can edit the Google Sheet. This means that you can’t control who will be editing it (careful!) but you can really widely distribute the data collection.

Once you have distributed the link either to your collaborators or more widely it is time to collect data. This is where I think that the “app” part of this is so cool. You can edit the Google Sheet from a Desktop computer, but if you have the (free!) Google Sheets app for your phone then you can also edit the data on the go. There is even an offline mode if the internet connection isn’t available where you are working (more on this below).

For the controlled distributed system you are specifically giving access to individual people - you can provide some training or a walk through before giving them access.

You could be much more detailed depending on the case.

One of the cool things about Google Sheets is that they can even be edited without an internet connection. This is particularly useful if you are collecting data in places where internet connections may be spotty. But that may generate conflicts if you use only one sheet.

There may be different ways to handle this, but one I thought of is to just create one sheet for each person collecting data (if you are using controlled distributed data collection). Then each person only edits the data in their sheet, avoiding potential conflicts if multiple people are editing offline and non-synchronously.

Anyone with the link can now read the most up-to-date data with the following simple code.

Here the url is the one I got when I went to the “File” menu and clicked on “Publish to the web…”. The argument ws in the gs_read command is the name of the worksheet. If you have multiple sheets assigned to different people, you can read them in one at a time and then merge them together.

So that’s it, its pretty simple. But as I gear up to teach advanced data science here at Hopkins I’m thinking a lot about Sean Taylor’s awesome post Real scientists make their own data

I think this approach is a super cool/super lightweight system for collecting data either on your own or as a team. As I said I think it could be really useful in public health, but it could also be used for any data collection you want.